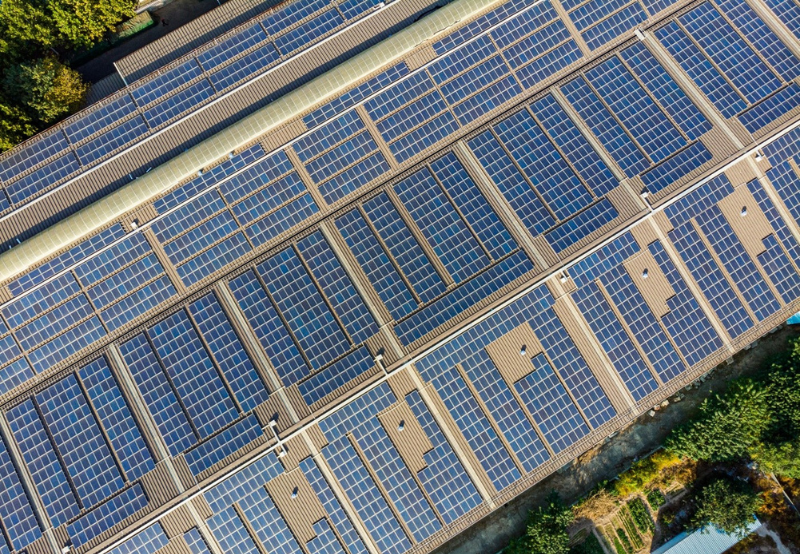 The country registered its second-best quarterly installations after Q2, 2021. While the demand for rooftop solar has increased across the country, the industrial sector specifically saw the highest numbers installed, with 47% of the total installations in the sector. Commercial establishments recorded 29% of the rooftop solar installations.

Rooftop solar has been the most viable choice for commercial and industrial (C&I) energy consumers because of its affordability and the long-term savings associated with it.

Mercom India recently hosted the C&I Clean Energy Meet 2022 in Bengaluru, bringing together rooftop solar industry experts and C&I end-users to discuss the benefits and challenges in the segment.

The demand for rooftop solar in the C&I segment has been the driving force behind the growth of installations.

Commenting on the benefits of rooftop solar to the C&I sector, Yogish said, “For manufacturing companies, the energy savings have increased with the rooftop solar systems being integrated into the operations. A major part of the expenses in businesses is from energy consumption. Savings on energy will help bring down the overall cost. Rooftop solar projects have a life span of 25 years, so the savings keep coming even after the ROI period, which is approximately four to five years.”

Harinarayan addressed the primary misconceptions of the consumers around the cost of rooftop solar. “Most businesses worry about the cost of installing rooftop solar and disruptions in power supply. The truth is that rooftop solar is the cheapest energy source as there are no transmission or distribution losses. A 100 kW rooftop system for a C&I unit generating 150,000 units of energy would cost approximately ₹5 million (~$64,418). Considering the accelerated depreciation, the system could easily earn a 25-35% return on investment within a year.”

Karthikeyan echoed Harinarayan’s views. “Rooftop solar offers better quality at a low price, service excellence, and speed of power delivery. There is no dependency on distribution and government policies, unlike open access. While consumers can choose to opt for OPEX or CAPEX model based on financing available for these projects, not all states support the OPEX model. For example, Karnataka does not have a leasing model. Through a CAPEX model, even if the return on investments takes four to five years, the project will keep contributing to the savings throughout its lifespan. Solar could help replace the expensive diesel generators consumers opt for in cases of power interruptions. Setting up a solar system for energy could be considered as good as planting trees and contributing to the environment.”

Kuppili addressed the technical aspects of the rooftop solar system and spoke about how businesses must identify their exact energy requirements to help choose the right kind of technology. “We have seen that industries abroad have always adapted to the developing technologies. For example, Building Integrated Photovoltaics (BIPV) technology has recently seen a rise in demand in Europe. Once consumers can identify their exact requirements, they can opt for the right technology for their systems, thus enhancing the project’s efficiency. Over eight to nine quarters, we would see technologies advancing in the Indian solar market.”

Outlining the challenges related to a rooftop solar system installation, Yogish said, “Rooftop stability when it comes to installing a system is seen as a hurdle. The rooftops have to be certified, which takes some time. Next is the net metering approval, which takes around three to four months, depending on the state. It is important to factor in these delays and ensure that a site study is done in advance to avoid delay in approvals.”

Karthikeyan said, “Consumers must first assess their capacity demand and then choose experienced developers who can help them with site study to ensure the safety and longevity of the project. It is also important to conduct a proper site assessment, including safety measures. In the solar segment, financing institutions don’t usually agree to a longer loan term, no longer than five to seven years for industrial establishments and much shorter for commercial. This, over time, has hindered the growth of rooftop solar in the segment. But as the industry grows, there would be some ease in this process too.”

He suggested that developers should encourage consumers to install a sky mesh over the rooftop systems to avoid any damage and ensure the safety and longevity of the system, even if it costs a little more. He said consumers must also select experienced developers who can provide project operation and maintenance services.

Harinarayan said experienced vendors help make the process easy by selecting the right technologies and offering performance guarantees for the contract period. However, consumers must assess their consumption capacity, contract demands, and energy consumption pattern to make the right choice.

Addressing the post-installation service aspect of rooftop solar systems, Kuppili added, “The developers must help choose the appropriate technology to match the consumer’s energy demands. The perfect power density and the right technology will help with higher efficiency rates in modules. The operation and maintenance of these systems over time play a major role in ensuring the power generation stays consistent. It is also important that the developers follow the manuals to operate and maintain the systems over time to ensure efficiency levels do not drop.”

With industries and commercial establishments increasingly shifting to renewable energy to save on costs and manage their sustainability targets, rooftop solar has emerged as the widely chosen option.

The event organized by Mercom brought industry stakeholders and end consumers face to face to discuss how this transition could be made with ease. Mercom India plans to host more industry-focused C&I events in Pune, Chennai, Coimbatore, Ahmedabad, and Noida.

Month in a Minute: Top Headlines from Indian Renewable Sector in January 2023