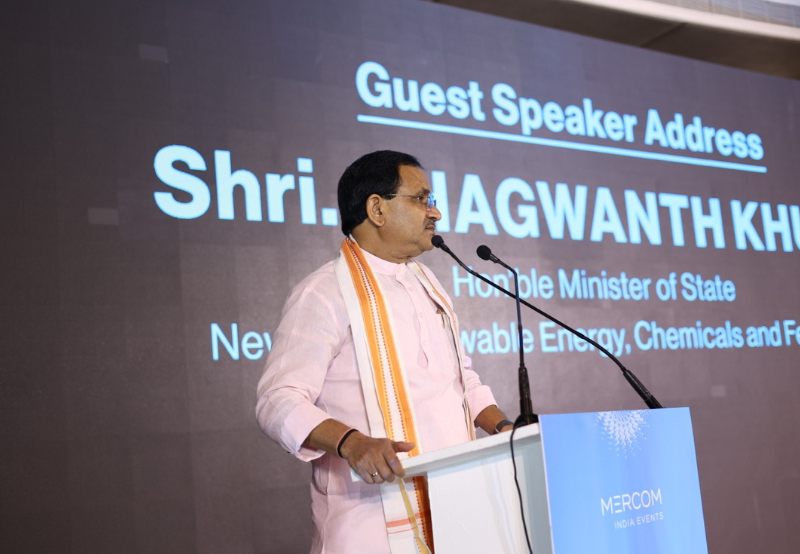 The government has made strong commitments to scale renewables, especially solar. Renewable energy is a top priority for the government, said Minister of State for New and Renewable Energy Bhagwanth Khuba at the Mercom India Solar Summit 2022.

The minister stated that the Summit is taking place at a crucial time when India is racing to fulfill its climate change commitments.

He called upon the industry to do its part to realize the government’s vision.

Khuba said the Summit was an ideal platform to look at India’s progress along with the five elements that the Prime Minister had presented to deal with the challenge of climate change. The Summit offered an opportunity to discuss and identify practical solutions to achieve the nation’s clean energy goals.

“I would like to inform the gathering that we have already achieved the target of 175 GW of non-fossil duels by 2022. Of the achieved target, 57 – 58 GW is solar, with another 40 GW under implementation and another 16 GW is already under tendering process,” Khuba said.

The minister highlighted the nation’s clean energy goals, including India’s race to reach its non-fossil energy capacity of 500 GW by 2030. India aims to meet 50% of its energy requirements from renewable energy, including solar, by 2030.

Khuba talked about the Production Linked Incentive Program to promote solar module manufacturing indigenously in line with the vision of ‘Aatmanirbhar Bharat.’ “We have to  manufacture all the components and provide opportunities to our youth.”

He said the government had imposed a duty on solar imports. But that was not to discourage Indian investors but to encourage Indian manufacturers. India, he said, should become a solar manufacturing hub.

The last budget earmarked ₹195 billion (~$2.61 billion) in the last budget for the PLI program to ensure that India can manufacture PV modules of 9 GW capacity.

He said India looked to reduce the projected carbon emissions by one billion tons from now through 2030 and reduce the carbon intensity of its economy by less than 45%. By 2070, India hoped to achieve the target of net zero.

“As a country and a community, we have made a lot of progress in this energy transition. I’d like to highlight some of the recent achievements we have made together. India recently reached almost 50 GW of its target of 60 GW of large-scale solar by 2022. Also, to boost domestic manufacturing under “Atmanirbhar Bharat,” the Government of India has announced an outlay of ₹240 billion (~$3.02 billion),” the minister said.

“The government has also floated a tender to set up manufacturing zones for power and renewable energy equipment. Also, bids for 37 GW of offshore wind energy projects through FY 2029-30 have been announced,” he added.

While India had achieved much, it still had a long way to go to become one of the world’s top solar markets.

He said that the government was committed to making the renewable market in India attractive to both global and domestic investors and called upon the industry to do its part to make it a reality.

Hinting at the release of a green hydrogen policy document, the minister said, “India is keenly focusing on green hydrogen production. The finance ministry has already announced that by 2024-25, India will start producing significant quantities of hydrogen energy and green ammonia. Very shortly, a hydrogen document will be rolled out. The government is not only creating hydrogen production; we are also creating demand. It will be mandatory for heavy mobility machinery, fertilizers, etc., to use hydrogen.”

According to Mercom India’s Q1 2022 India Solar Market Update, India’s cumulative installed solar capacity stood at 52 GW at the end of Q1, with over 3 GW added during the quarter. India added 4.6 GW of total power capacity during the quarter, with solar accounting for 68% of it. Based on Mercom’s forecast, 2022 is expected to be even better.

India has installed 45.6 GW of utility-scale solar capacity to date, 14.4 GW shy of meeting the government-set target of installing 60 GW by 2022, according to Mercom’s India Solar Project Tracker.