The larger the solar installation higher the effects on water temperature 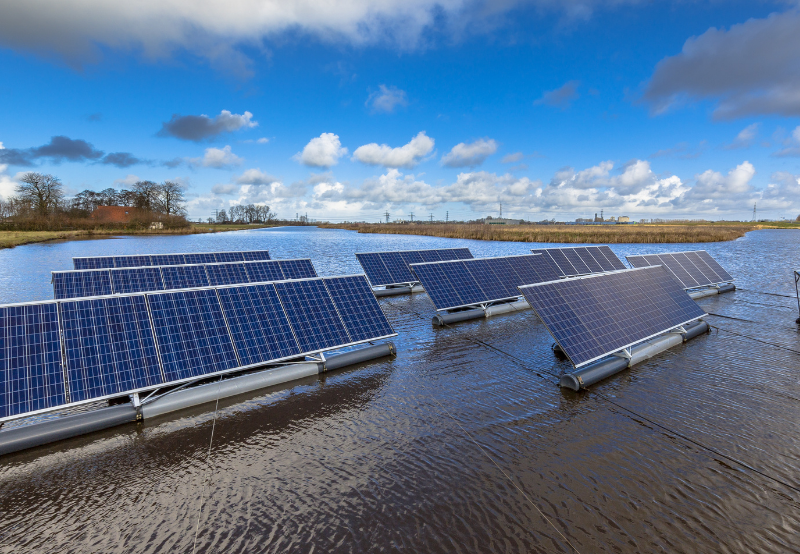 According to a new study, floating solar farms could help protect lakes and reservoirs from some of the harms of climate change.

Scientists from Lancaster University and the University of Stirling have completed the first detailed modeling of the environmental effects of floating solar installations on water bodies.

Their results show that floating solar arrays can cool water temperatures by shading the water from the sun. At scale, this could help to mitigate against harmful effects caused by global warming, such as blooms of toxic blue-green algae and increased water evaporation, which could threaten water supply in some regions.

The scientists found that floating solar installations also reduce the duration of ‘stratification’ — this is where the sun heats the water, forming distinct layers of water at different temperatures. This tends to happen more in the warmer summer months and can result in the bottom layer of water becoming deoxygenated.

However, the picture is complex, and there are also conditions under which stratification, and therefore detrimental water quality impacts, could increase if floating solar farms are deployed.

There are three commercial-size floating solar arrays in the U.K. and hundreds more across the world. The number of installations is likely to grow significantly in the coming decades as demand rises for renewable energy sources, with more countries committing to net-zero carbon targets.

However, little is known about the impacts – both positive and negative – these floating solar farms have on the lakes and reservoirs.

“As demand for land increases, water bodies are increasingly being targeted for renewable energy. Deployment of solar on water increases electricity production, but it is critical to know if there will be any positive or negative environmental consequences,” said Giles Exley, lead author from Lancaster University.

“Given the relative immaturity of floating solar farms, it is important to further scientific evidence of the impacts. Our results provide initial insight of the key effects that will help inform waterbody manager and policymaker decisions.”

The research team undertook computer modeling using the MyLake simulation program and data collected by the Centre for Ecology and Hydrology from England’s largest lake, Windermere. Although the researchers believe it is unlikely floating solar farms will be deployed on Windermere, it presents a rich dataset as it is one of the most comprehensively studied lakes in the world.

Exley said: “The effects of floating solar on the temperature of the water body and stratification, both of which are major drivers of biological and chemical processes, could be comparable in magnitude to the changes lakes will experience with climate change. Floating solar could help to mitigate against the negative effects global warming will have on these bodies of water.”

“However, there are also real risks of detrimental impacts, such as deoxygenation causing undesirable increases in nutrient concentrations and killing fish. We need to do more research to understand the likelihood of both positive and negative impacts.”

The effects on water temperature increased the larger the solar installation, with small arrays of less than ten percent of the lake surface generally having minimal impacts. However, this model concentrated on one lake. Further studies will be needed to determine the optimum size array, design, and effects for individual lakes and reservoirs – all of which have unique characteristics. Different designs of solar installations also have different shading and sheltering effects for the sun and wind.

Arrays covering more than 90% of a lake could increase the lake’s chances of freezing over in winter, the study found. However, these effects would also be specific to the body of water and design of the installation and require further research.

Conventional solar farms are controversial due to the amount of land they take up. This leads to increased interest in floating solar farms, given the additional space that water bodies provide.

Floating solar has gained traction in India mainly due to the availability of many dams, lakes, and reservoirs where such projects can be easily installed, given the increasing difficulty in acquiring land to develop large-scale projects.

According to a research report by the National Renewable Energy Laboratory (NREL), the addition of floating solar projects on the top of water bodies, which already have hydropower stations, can annually generate around 7.6 TW of clean energy from the solar photovoltaic systems alone.